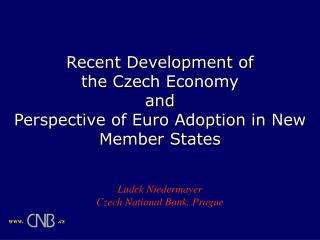 Competitiveness of Polish Economy Perspectives for Euro Adoption - . magdalena zając. entry to the eu: 2004, may 1st

How standardisation contributes to the development of Economy (the EU/Czech PERSPECTIVE) - . miroslav chloupek

ADOPTION AND INTERNATIONAL ADOPTION IN THE CZECH REPUBLIC - . the contents of the presentation. some information about

The euro crisis: ways out for the euro zone and its member states - . vesa vihriälä 28 november 2012. contents. where

Euro Adoption in Slovenia - . boštjan jazbec member of the governing board the views expressed are those of the

Role of Member States in the Development of Statistics in the Global Crisis - . charles enoch deputy director statistics

The Mediterranean and the New Euro-Mediterranean Perspective - . existing and proposed natural gas delivery systems to