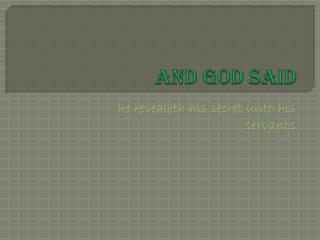 And God said. he revealeth his secret unto his servants . Gods word. Is Gods word changeable? Can it change? If not what happens to those that decide to change Gods word? If it is changeable what is the case than?. Gods word.

You said… - . we did ……. patient survey. towards the end of 2012 we conducted a patient satisfaction survey which

Einstein Said… - . “…imagination is more important than knowledge. for knowledge is limited to all we now know and

I Asked and God Said Author Anonymous Images by Lee Hoedl - . i asked god to take away my habit. god said, “no. it is

God Said It - I Believe It - That Settles It! - . it is a good thought. it conveys the message that since god said it,

“Because GOD said so….” ( that’s why.) - Talking about homosexuality from a baha’i perspective marianne

Walking With the Spirit Fellowship – jealous partnership God said, “Enough” – - Your sins cut you off from god

You Said - . products . we did. success . in december 2011 we will be launching the btw.com web site to make it easier to

You Said - Service broadband. you said. we did. update. repeat sfi’s . you were unhappy with the number of repeat sfi