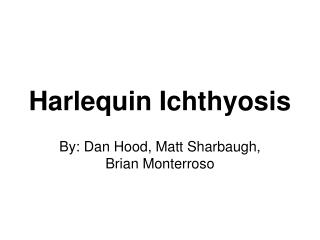 Harlequin Ichthyosis. By: Dan Hood, Matt Sharbaugh, Brian Monterroso. WARNING!. THE IMAGES YOU ARE ABOUT TO SEE ARE REAL AND MAY CAUSE SOME TO BECOME QUEASY !. Biological Basis. Intro: Harlequin-type ichthyosis : - . it is a congenital (involves defects in or damage to a developing fetus) disease.

Ichthyosis - . created by: matt maumalanga bryce ragatz. what are ichthyoses

“Repent, Harlequin!” Said the Ticktockman - . by gabby thompson and henry parson. harlequin game! . you may not talk

The Harlequin Fabrics: A Diverse Fusion of Elegance and Beauty! - Using wallpaper to your home is a great way to create