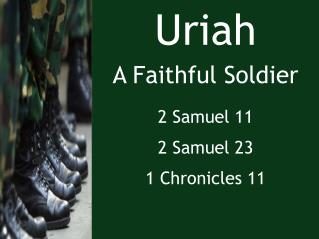 Uriah. A Faithful Soldier. 2 Samuel 11. 2 Samuel 23. 1 Chronicles 11. 5 Characteristics of Uriah, the faithful soldier. 1) He was a CONVERTED man. 3 And David sent and inquired about the woman. And one said, “Is not this Bathsheba, the daughter of Eliam, the wife of Uriah the Hittite? ” History of the Bassett, Edgecomb, and Snyder Families - . 100 th bassett-edgecomb-snyder reunion - 2007. why is it called

Nathan - . god’s spokesman. a prophet or spokesman for god in the days of david &amp; solomon history of acts of

HE SLEPT AT THE KINGS DOOR - . 2 samuel 11. uriah the hittite. hittite’s a war like tribe to be driven out by israel

Claude Mckay - By eric worthey. claude mckay. was born in sunny ville jamaica, west indies was the youngest of 11 was

Alcoholics Anonymous - . by: richie brady. what is alcoholics anonymous?. according to the text, aa is a self-help group.

CADETS - . cadets. cadets can attain rank within the aco. the ranks are the same as the raf. you will wear a rank slide

Descriptive Writing: Objectives - . must: understand the importance of vocabulary choice. should: use paragraphing and a

Goals - . understand what is meant by “church”, particularly from the catholic perspective. to do this, we will…..

Group Influences - . 1996. what is a reference group?. an individual or group who serve as points of comparison or

Lab #1 Report due TODAY - . individual data processing and individual write up lab #1 report is due today by midnight