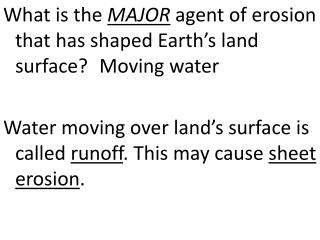 What is the MAJOR agent of erosion that has shaped Earth’s land surface? Moving water Water moving over land’s surface is called runoff . This may cause sheet erosion . The amount of rain an area receives. Vegetation - grasses, shrubs & trees reduce runoff Movement of the Earth’s Crust - . earth’s changing surface. there are two major sections of the crust: the

How do geologic processes change the shape of Earth’s surface? - . what do earth’s layers consist of?. crust mantle

Chapter 7 Soil Agriculture and the Future of Food - . soil: the foundation for agriculture. land devoted to agriculture

Earth’s Topography - . although our planet is called earth, much of it is covered with water. all the land on earth is

Weathering, Erosion and Deposition - . by: brianna shields. do now. how are igneous rocks made? when rocks are pushed

MAP READING AND LAND NAVIGATION - . fm 21-26. definition of a map. a map is a geographic representation of a portion of