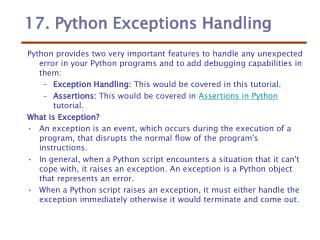 17. Python Exceptions Handling. Python provides two very important features to handle any unexpected error in your Python programs and to add debugging capabilities in them: Exception Handling: This would be covered in this tutorial. Chapter 9 Merchandise Buying and Handling - . learning objectives. describe the major steps in the merchandise buying and

Materials Handling, Storage, Use and Disposal - . 29 cfr 1926 – subpart h. objectives. in this course, we will: discuss

Cargo Airport Services and Its Cargo Handling Solutions - . a presentation to hanjin hdq february 20, 2013. a truly

Python in a .NET world - . how to use the best scripting language ;). who am i, why python etc. i've been working as a

EVENT HANDLING - . event handling is at the core of successful applet programming there are several types of events the