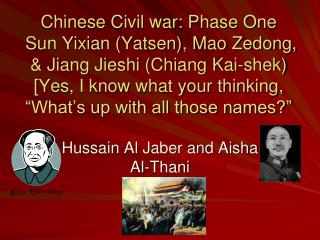 Chinese Civil war: Phase One Sun Yixian (Yatsen), Mao Zedong, & Jiang Jieshi (Chiang Kai-shek) [Yes, I know what your thinking, “What’s up with all those names?”. Hussain Al Jaber and Aisha Al-Thani. Formation of the Chinese Republic. The Qing Dynasty had been in power since 1644

By: Noor Al Thani 8B - Does a connection or a relationship exist between the reactivity of a metal and when was it

By: Hissa Al-Thani Special Rapporteur on Disability - Life situations of persons with disabilities in developing

Difference between C/AL and AL - Coding language has changed from c/al to al (i.e. al-extension v2.0) with the custom

Al-Masjid Al-Haram - . masjid al-haram is a large mosque in the city of mecca, and the largest in islam. did you know