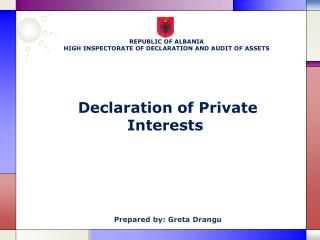 REPUBLIC OF ALBANIA HIGH INSPECTORATE OF DECLARATION AND AUDIT OF ASSETS. Declaration of Private Interests. Prepared by: Greta Drangu. Officials who have the obligation to declare.

America Becomes a Colonial Power - . h-o-h: why did america join the imperialist club at the end of the 19c?. 1.

Declaration of Sentiments (1848) SENECA FALLS CONVENTION - . elizabeth cady stanton in 1848 with two of her three sons.

Chapter 14 - . understanding labor relations and collective bargaining. a union is an organization of workers, acting

Holland Code - . gary brackett. the holland code. let us assist you in matching your interests to jobs by: identifying