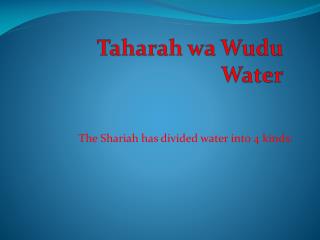 Taharah wa Wudu Water. The Shariah has divided water into 4 kinds:. Mutlaq Water. Considered pure because of its inherent purity and can be used by an individual to purify himself/herself. It consists of the following categories:  Rain water, snow & hail – all are pure