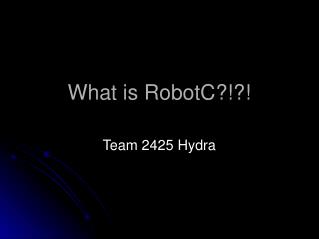 An Introduction to Vex Coding - . by joseph newman. what languages are available?. we will be covering two popular

Variables and Functions - . robotc software. variables. a variable is a space in your robots memory where data can be

ROBOT C for CORTEX While Loops Part 1 - . while loops. a while loop is a structure within robotc which allows a section