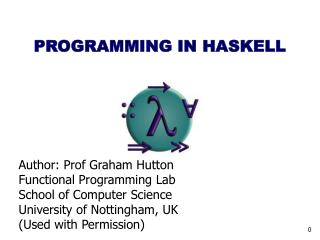 PROGRAMMING IN HASKELL. Author: Prof Graham Hutton Functional Programming Lab School of Computer Science University of Nottingham, UK (Used with Permission). The > prompt means that the system is ready to evaluate an expression. For example:. > 2+3*4 14 > (2+3)*4 20

The Evolution of Major Programming Languages - . concepts of programming languages. objectives. learn about the language

Logic Programming - Logic programming had its beginning in early 1970s. it was primarily introduced by kowalski (1974)

Introduction to Python - . materials based on contents from the course programming with python by chad haynes. outline.

Introduction to Programming in Haskell - . chalmers &amp; gu emil axelsson and john hughes (with thanks to koen

CSC 202 Computer Programming - . what is program ? program is a set of instruction that a machine follows. what is