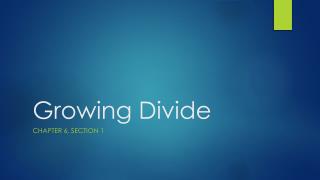 Growing Divide. Chapter 6, Section 1. Slavery Divides the Nation. Growing tension over the issue of slavery developed over the years. With the inclusion of many new territories after the Mexican-American War, the issue had to be addressed. First attempt= Wilmot Proviso. The Growing Economic Divide - Thanks. many of the charts were developed by united for a fair economy,

Growing Crises and Divide - . chapter 6, sections 1-3 . division over slavery. the major question after the

The growing divide: Poverty in today’s Sweden - . the concept, the crisis, and the consequences. björn halleröd

Digital Divide - . by: rebecca smith and patrick simms. what is it?. digital divide is defined as the gap between people

Generational Divide - . by alison stein wellner. a generation defined. webster’s: “a category of people born and

Digital Divide - . should the public subsidize computer and/or internet access for underserved areas and communities?

Digital Divide - . by: gilfredo vargas jr. what is digital