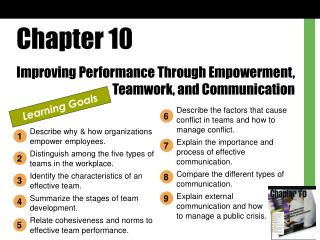 Chapter 10 Improving Performance Through Empowerment, Teamwork, and Communication. Learning Goals. Describe the factors that cause conflict in teams and how to manage conflict. Explain the importance and process of effective communication. Compare the different types of communication. Improving Work Planning Through Communication and Training - 2. 2. presentation overview . a little background why

“Better team performance through empowerment of yourself and others” - . vandana. qs we need to ask…. what do we

Youth Empowerment Through - . swat mission. to empower and unite youth to resist and expose big tobacco’s lies while