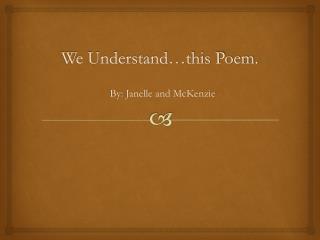 We Understand…this Poem. By: Janelle and McKenzie. Summary. The main idea and speaker’s message of “I Understand the Large Hearts of Heroes” is that heroes always suffer, and everyone is a hero in their own way. Poem – Leisure By: William Henry Davies - . william henry davies. born in wales in 1871 a poor man wrote poems based on

Stock Valuation - . understand how stock prices depend on future dividends and dividend growth be able to compute stock

Just Because Poem - . notice the structure/form?. just because i’m scared don’t laugh and giggle behind my back

“To His Excellency, General Washington” - . by phillis wheatley. introduction. wheatley prefaces the poem with a

HOW TO READ A POEM - . with an open ear and an open heart. poetic steps. read straight through to get a general sense of