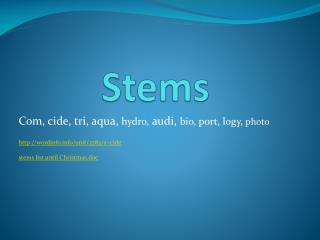 STEMS - . roots and leaves together are sufficient to take up all essential resources, so why make stems?. stem

Stems - . list 6 quiz december 7 th. ver - truth. ver truth. the verdict of the case was not guilty. i will verify my age

Stems - . baylee berg. definition. stems- plants in which the stock of it can be eaten generally tender and needs little

STEMS - . lesson 9. how to use foldable. step 1. step 2. an. definition – without angular – without curves anxiety

STEMS - . external form of a woody twig. a. attachment of leaves to twig 1 . alternate (one leaf) 2 . opposite (two

stems - . 2011. stem. stem may be defined as something that bears leaves . but this definition is too simplistic; it

Stems - . s7-3-1. 2 functions of a stem. transport water, minerals, and food between roots and leaves (via phloem and

Stems - . stems. a stem is the other structural axis for the plant after roots. it is composed of nodes and internodes .

Stems Stems have many functions - . 1. support the leaves (hold them up) 2. transport water and sugars 3. provide