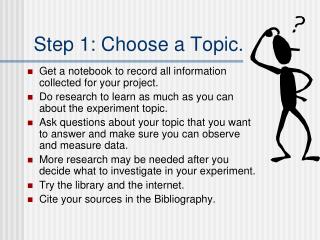 Step 1: Choose a Topic. Get a notebook to record all information collected for your project. Do research to learn as much as you can about the experiment topic. Ask questions about your topic that you want to answer and make sure you can observe and measure data.

Why should I choose the EPQ? - . what are the advantages of completing epq?. it allows you to choose a topic that is of

Four Square Writing and Step Up to Writing - . why both programs?. prewriting and organizational skills are taught

The Research Paper - . what is research?. the process of gathering information about a topic. it involves skills such

Thesis Maker: Three Steps to a Strong Thesis Statement - . a tutorial for the students of mount vernon high school by

Steps in Researching - . step by step guide. topic. decide on a topic or contemplate the topic assigned to you you know

Steps to Writing a Research Paper - . step #1: choose a topic. if given a topic, choose your angle or approach. consider

Poster Assignment Recap - . step 1: choose a topic step 2: choose a paper: must have a hormone measure/manipulation must

Thesis Maker: Three Steps to a Strong Thesis Statement - . a tutorial for the students of mount vernon high school by

The WRITING PROCESS - . 1. choose a topic. a topic can be given to you by your teacher. in the case that the topic is

REQUESTING A COMPUTER LAB - . step one. go to sign in . www.sharylandisd.org. step two . you will be asked if you want to

Choosing a Scientific Research Topic - . a step-by step guide. step one. make a list of ten general topics that are of

The Argumentative Essay - . everything you need to know to write one! a powerpoint presentation by cara gratton. step

The Argumentative Essay - . everything you need to know to write one! a powerpoint presentation by cara gratton. step

Poetry in the Primary Grades - . looking with your poet’s