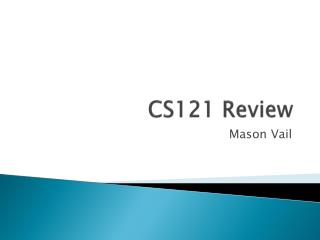 CS121 Review. Mason Vail. Class. A data type definition – “blueprint for objects” Includes properties and/or methods “instance” data / methods – specific to one object (instance) of the class “static” or “class” data / methods – belongs to the class itself, shared by all objects of the type. CS121 - Computer science i. cs121. who am i?. dr. barry wittman not dr. barry whitman education: phd and ms in computer