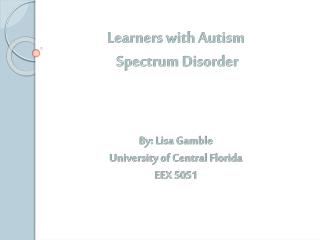 Bullying and the Autism Spectrum - . a presentation by: eric weingart and boy scout troop 261. put the poster on this

Learners with Autism Spectrum Disorders - . by: drew burns and barb marko. what is autism spectrum disorder?. it's own

Autism Across the Spectrum - . what is autism. pervasive developmental disorder symptoms typically appear before the age

How does it feel to be a child with Autism Spectrum Disorder? - . catharine silva. review of literature. defining

Autism - . definition. a neurodevelopmental disorder that affects the way a person communicates and relates to people