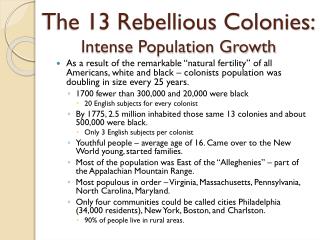 The 13 Rebellious Colonies: Intense Population Growth. As a result of the remarkable “natural fertility” of all Americans, white and black – colonists population was doubling in size every 25 years. 1700 fewer than 300,000 and 20,000 were black 20 English subjects for every colonist Which of the following is NOT one of the factors that play a role in population growth rate? - . immigration death rate

Populations - . chapter 24 http://blue.census.gov/ipc/www/clock.html. human population. we have seen factors that

The Thirteen Colonies and Geographical Regions - . what geographical region was settled by english, dutch, and german