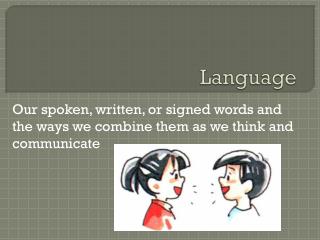 Language. Our spoken, written, or signed words and the ways we combine them as we think and communicate. Characteristics of Language. Grammar A system of rules that allows for understanding. Generativity The ability to create infinite amount of expressions using a limited amount of words. Language - . language is like plumbing, we only pay attention when something goes wrong. the crazy english language!. why

Language! - . where the language is used, how they are grouped, why distributed that way . some stats to start with. the

Language - . chapter 6. key question 1 :. what are languages, and what role do languages play in cultures?. why

Language - . chapter 6. key question :. what are languages, and what role do languages play in cultures?. language.

LANGUAGE - . chapter 6. what are languages, and what role do languages play in culture? . language : a set of sounds,

LANGUAGE - . what is language? what is the role of language in knowing? how does it influence what we know and how we

LANGUAGE - . language introduction. language= one of the oldest, most geographically diverse and most complex cultural

Language - . 言語ユニット. why geographers study language . provides the single most common variable by which

Language - . a language is a system, used for communication, comprising a set of arbitrary symbols and a set of rules by

Language - . how can something so difficult be so easy?. language. is complex is multi-layered requires a huge knowledge

Language - Animal language. animals are capable of limited communicationlanguage in animals is not comparable to human

Language - . the summer institute for linguistics (sil) ethnologue survey (2009) lists the following as the top languages