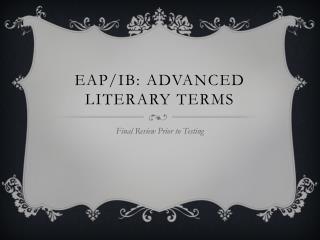 EAP/IB: Advanced Literary Terms. Final Review Prior to Testing. Literary Terms. Allusion: a reference to something outside of the work of literature (usually historical or literary) Welcome - . to. jeopardy!. final jeopardy. round 1. round 2. poetry. transcendentalism. the great gatsby. of mice and

Please take out a notebook. You need three sections - . journals literary terms notes on texts. in this power point, when

Literary Criticism - . class #2. the distinctive doctrine of structuralism: “the belief that the individual units of

Literary Criticism - . class #3. “semiotics, structuralism, and television” from channels of discourse (1996) by