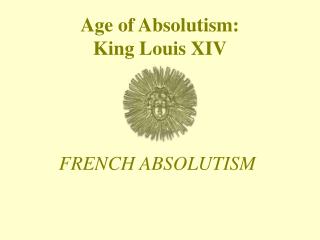 Unit 6 Part I - . absolutism and scientific revolution chapters 5 and 6. absolute rule. absolutism: period when a series

Holes By: Louis Sachar - . created by: chealsea slider . about the author louis sacher

A New Home for the Sun King - . ~22m. besides a dislike of paris, louis also built versailles from a love of outdoors

King David - . intro to king david. king david is one of the most important figures in jewish history. born in 907 bce,

Absolutism and Louis XIV - . absolutism. - political belief that one ruler should hold all of the power within the