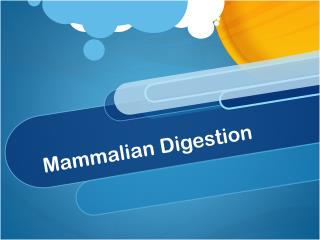 Mammalian Digestion. Mammalian digestion. In heterotrophic organisms the digestive system provides the means by which nutrients are taken in and broken down. Large insoluble food molecules are converted into small soluble ones that can be absorbed and made available to the body cells. Mammalian Lungs - . list the features of the mammalian lung that adapt it to efficient gaseous