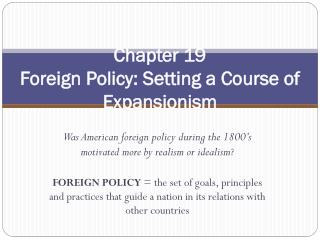 Chapter 19 Foreign Policy: Setting a Course of Expansionism. Was American foreign policy during the 1800’s motivated more by realism or idealism ? FOREIGN POLICY = the set of goals, principles and practices that guide a nation in its relations with other countries. The purpose of America’s Open Door Policy was to - 1. in 1900 the united states declared an open door policy that