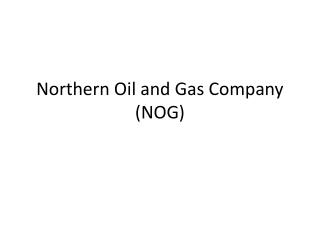 Northern Oil and Gas Company (NOG). Brief history of recent US oil boom. US has been aware of massive shale oil deposits since 1960s Didn’t become economically viable to drill them until around 2005 (hydraulic fracturing and horizontal drilling)

Chapter 3 Settling the Northern Colonies 1619-1700 - . i. the colonists established different patterns of settlement.

The GEOGRAPHY OF LATIN AMERICA - . part i: mexico. warm up: look at the pictures in the slide. these people are involved

Company profile - . the function of company profile. information about company (for common people, for client, other

The Northern Renaissance - . where are we talking about…northern?. renaissance art in northern europe. should not be

Mobility and Immobility chapter 47 - . the nature of movement. coordination between the musculoskeletal system and the

Women and the Civil War - . click below to explore the unique and similar experiences of northern and southern women.