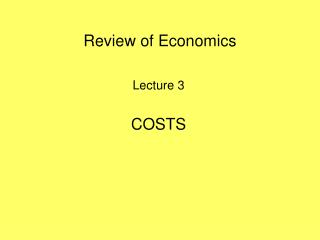 ECONOMICS: Review - . supply &amp; demand &amp; basic applications. 1. what is the difference between demand and

Economics Review - . mrs. slaggie’s geo. what happens in developing countries when girls are educated?. they have

Economics Review - . chapter 4-7. when the government sets a maximum price that sellers may charge for a product , this

HL2 ECONOMICS REVIEW OF ELASTICITY - . an introduction to elasticity . supply &amp; demand. businesses supply to a

Economics EOCT Review - . 1. a need is something necessary for survival. air, food, shelter a want is an item that we

Economics Literature Review - Http://www.litreview.net/ stop searching for topics on your literature review, because

ECONOMICS DPM REVIEW - . basic economic ideas. scarcity is everywhere! when a choice is made, the opportunity cost is the

Economics Final Review - . factors of production. land, labor, and capital: all the resources that are used to make all

Economics EOCT Review - . which of the following is a likely result of a high unemployment rate in the united states?.

Economics EOCT Review - . which of the following is a likely result of a high unemployment rate in the united states?.

Economics Review Game - . you have a kit kat bar to split among 4 other classmates. describe the allocation system that

Unit 2 Review Economics - . fall 2009. do now. within your pods, discuss the question that follows: what are the

Economics Review Rebecca Angoyar - . process of improving the material conditions of people through diffusion of