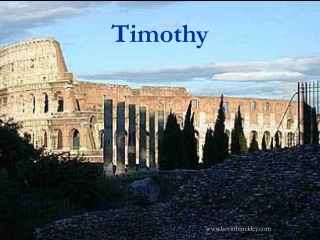 Timothy. www.kevinhinckley.com. Top Five Songs Played at an English Funerals. 5- She’ll be coming ‘round the mountain when she comes…. 4- YMCA (Village People) 3- Ring of Fire (Johnny Cash) 2- Another One Bites the Dust (Queen) 1- Smoke Gets in Your Eyes (The Platters). Timothy timeline - . mt parents named me timothy it was important to me because that was the first day i berthed on

2 Timothy - . god, who stands with us. definition of worth, success. success = position, power, popularity, prosperity?.

Timothy Haselman - He has researched "comparative sequence analysis of structural rna", the main goal of his