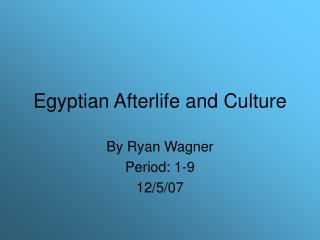 Egyptian Art and Writing - . the rosetta stone. in 1799, napoleon took a small troop of scholars, linguists and artists

Egyptian Culture and Accomplishments - . women. h ad higher status than in many other ancient societies c ould enter into

Ancient Egyptian Culture: - . by:. economy:. based on a surplus of food traded with foreign countries africa, arabia, and

Egyptian Language and Pyramids - . do now. take out your hieroglyphic drawings and share what you have written. written

Egyptian Culture - . and stuff. gods and goddesses . the sun god – amon -re judge of the dead – osiris goddess of

Death &amp; Afterlife - . the practitioners of vodou revere death, and believe it to be a great transition from one

Afterlife Workshop - . a philosophical journey. objective. swbat to revise and strengthen their writing through a writing

Ancient Egyptians and the Afterlife - . all egyptians were concerned with life after death. the bodies of kings and