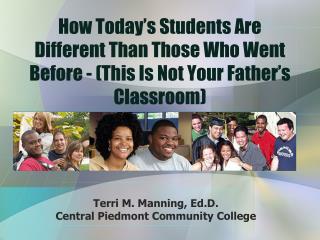 How Today’s Students Are Different Than Those Who Went Before - (This Is Not Your Father’s Classroom) . Terri M. Manning, Ed.D. Central Piedmont Community College. Each Generation. Who Are the Students You Teach Today? - . youtube - a vision of k-12 students today. who are you?. the mature generation

the new world of laboratory medicine: it s not just your father s microscope anymore - Perspective. to thrive in highly

Today ’ s Agenda… - . bellringer: which energy source do you think is the best alternative to fossil fuels in our

A FATHER S BLESSING - I love you; i'm proud of you; i believe in you, andyou're a. but thanks be to god. he gives us the

How Today’s Students Are Different Than Those Who Went Before - (This Is Not Your Father’s Classroom) - . terri m.

Blessed are Those who Mourn - . matthew

Who Are Those Episcopalians? - . pilgrim’s path – week 4 by. the rev. alex riffee. ancient english christianity.

“ Command those who are rich in this present world not to - Be arrogant nor to put their hope in wealth, which is so

Blessed are those who Mourn - . for they will be comforted. the beatitudes. christ on the cross. for they shall be

Those who claim not to be culpable are culpable. - The same blood that condemns us also saves us. the man who can’t

Tips for Those Who are Going to Mountain S ki R esort - . my plan. 1)aim of the trip 2)outfit 3)equipment 4)skiing or

Those who went ahead and those who followed shouted, “Hosanna!”

Who Tracks Those Students? - . child accounting pasbo conference * march 11, 2010. who tracks those students?. who are