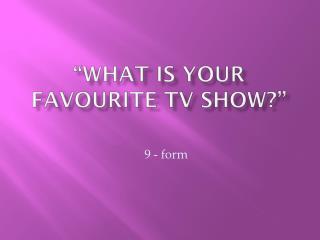 “What is your favourite TV show?” . 9 - form. Answer the questions: How often do you watch TV? When do you usually watch TV? . Which of the following possible aims of television do you think is the most important? • to instruct • to inform • to entertain Favourite Quotes - Favourite quotes from famous people that will inspire

To Do - . addm – add chart showing advice over time client id – draw sessions and client bouncing from session to

Bonding - . mr field. using this slide show. the slide show is here to provide structure to the lessons, but not to limit

Quiz Show - . dr. jinan darwish 26th september, 2013. 1. a deficiency of which of the following vitamins is associated

Instructions for operating the game: - The game is played in slide show mode (select slide show, view show from menu)

What the Nuer film did not show us: - . the rainy season. agriculture. the civil war. the nuer film did show us (in large

a graph that uses symbols to show data - . pictograph. the number that is the result of multiplying 2 or more factors

New York revs up for auto show - The 2012 new york international auto show will run from apr. 6 - 15 at the jacob javits

MY FAVOURITE SPORT - . my favourite sport is tennis i’ve got a red skirt and a pink t-shirt i`haven’t got a football