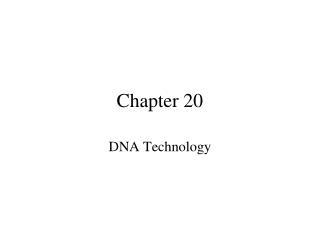 Chapter 20. DNA Technology. P 365. Animation. Plasmid. Recombinant DNA. Ligase seals backbone. Only some bacteria get a plamid. Antibiotic added to screen out those without plasmid. Only one plasmid has the FROG gene.