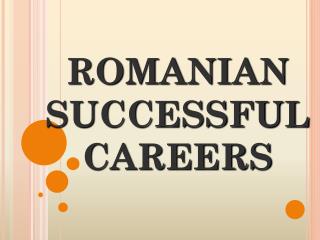 ROMANIAN SUCCESSFUL CAREERS. Table of contents. I. THE KEY TO SUCCESS. MOTIVATION - a successful career depends on how much work you can do and how efficient you can be while doing it. To know what motivates you, you have to understand what things you find rewarding or inspiring. IT IS YOUR CHOICE! - . lightening!!!. can you guess?. nontraditional careers. is there one for you?. definition of a

Expanding the Talent Pool: Recruitment and Careers - . the challenges of human resources management. strategic aspects of

The Ten Steps to Successful Breastfeeding - . from: a joint who/unicef statement published by the world health

Can Do Careers for Deaf People - . “deaf people can do anything, except hear.” i. king jordan president gallaudet

What can I do with a Degree in Drama ? - . careers and employability service. nicola urquhart careers adviser