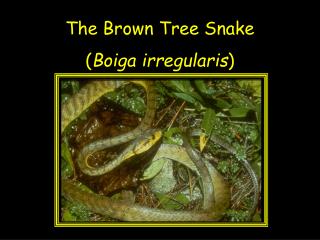 The Brown Tree Snake ( Boiga irregularis ). SNAKE INVADERS !!!. The brown tree snake is an introduced species on the island of Guam that first appeared in the early 1950’s. Typically individuals are 3-4 feet in length, but “honkers” up to 10 feet are known The Brown Tree Snake ( Boiga irregularis ) - . snake invaders !!!. the brown tree snake is an introduced species on the

The Flying Snake - . by jj. the flying snake is 2 feet long. its coler is black or dark gray. it is a venomous snake. it

Moving the Snake - Movesnake () method. moving the snake. how do we move the snake?. in the program, the snake head and

The Snake Game - . lesson 14. how the snake game draws the snake!. the snake is drawn one pixel at a time. uses the pset

The Eastern Hognose Snake - . by kristopher hind. they are very interesting looking!. they are black, brown, gray and

The snake By Jassim - . slimy slipery slurpy snake got . crushed near the roud . ahh ahh

Symbolism Of the snake - . kenzie david austin reese dakota kotlin. text references. “one of them slid down into your

The “ Greedy Snake ” Algorithm - . nick govier david newman. overview. what is “greedy snake”? how does it work?

Using The Snake Fence - . with common core standards for ela/social studies, grades 6-8 why i wrote the book how i wrote

The Snake and the Gemstones - . written by kendall reis illustrated by lucas dimitt. one day a brave little anaconda