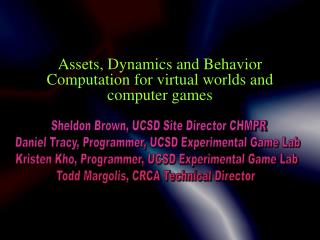 VIRTAUL REALITY - . by jessica lace . virtual reality . is a term that applies to computer-simulated environments that

Virtual Worlds - . definition: a genre of online community that often takes the form of a computer-based simulated

Education Games - . simple games specifically designed for the schools such as the bbc learning website. simulation and