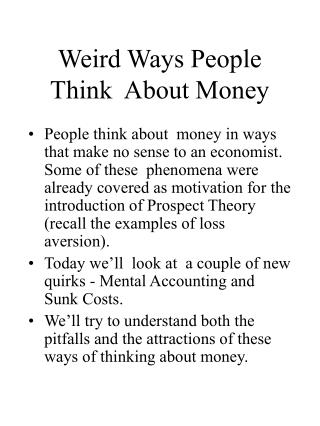 Weird Ways People Think About Money. People think about money in ways that make no sense to an economist. Some of these phenomena were already covered as motivation for the introduction of Prospect Theory (recall the examples of loss aversion). People think about you - . all the time!. how do you feel when…. someone yells during the movie you are watching?

10 Weird Ways People Celebrate Their Birthdays - Birthdays are all about complete fun and adventures. with the change in

What people think about complaining - . omnibus survey results - 11 september 2012. the expectations, experience and

Different ways to think about validity - . to the extent that a measure has validity, we can say that it measures what it

Ways to think about the web - . adam kilgarriff lexical computing ltd. to the web on its thirteenth

Helpful Ways To Think About It - An increasing number of people are now choosing to keep one around the home, as it is a

What People Think about Payday Loan - People have many misconceptions about payday loans like as they are good or bad,

Ways To Conquer anxiety About Money - Money is one thing that bothers almost half of the population. too much debt, not

Presumption: How do we think about money? - . do i rely on god or on my own wisdom financially ? do i take credit for my

5 Ways Geographers think about the World - . space : geographers observe regularities across the earth and depict them on

Think About… - . a job or career that involves the arts. what types of careers are there that individuals, make a