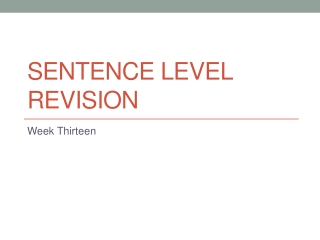 Revision at the Sentence Level - . emphasis, conciseness, and variety. revision priorities . look at your graders’

Sentence Revision - . sawyor ashley. pronoun-antecedent agreement. what not to do: ashley bought himself a new dress.

Sentence Revision - . by: natina racanelli. when do you capitalize nouns?. do i capitalize a proper noun in the sentence

Helping With A Level Revision - If you want to guarantee continued success in your exams and life, then look no further

Revision Techniques for A level students - . it’s all about specs. specs. see it personalise it exaggerate it connect