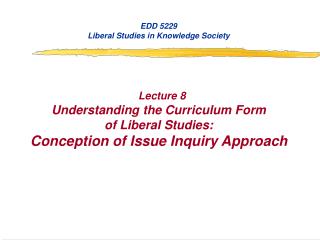 Social Studies – Form 1 - Support material: not f or commercial use. can be reproduced and used freely, but the author

Liberal Studies (2) - . why did the us eventually agree to reduce greenhouse gas emissions?. a) according to source 1,

Core Curriculum and Liberal Education - . yueh-ting lee college of arts and sciences at ut september, 2007. ppt. why do i

Feminism - . lo: to assess the feminist perspectives of the family. (radical, liberal and marxist). 3 types of feminism.

Presentation to the Prime Minister of Pakistan on Scheme of Studies Classes I-XII - 2. scheme of presentation. curriculum