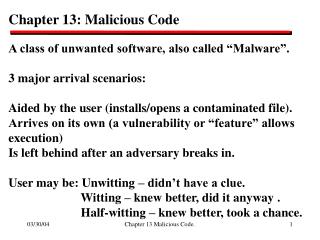 Chapter 13: Malicious Code A class of unwanted software, also called “Malware”. 3 major arrival scenarios: Aided by the user (installs/opens a contaminated file). Arrives on its own (a vulnerability or “feature” allows execution) Is left behind after an adversary breaks in. Coping With Malware and Other Sorts of Automated Abuse - . joe st sauver, ph.d. (joe@internet2.edu or joe@uoregon.edu)

Chapter 6 An Introduction to System Software and Virtual Machines - . 1. objectives. in this chapter, you will learn

Refactoring: Improving the Design of Existing Code - . definitions of refactoring. loose usage reorganize a program as a

Chapter 4 .1 Software Project Planning - . the four p’s. people — the most important element of a successful project