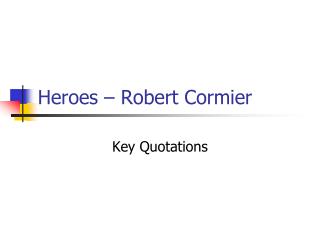 Heroes – Robert Cormier. Key Quotations. Chapter 1 – page 1. “My name is Francis Joseph Cassavant and I have just returned to Frenchtown in Monument and the war is over and I have no face.” Establishes the setting Introduces narrator in first person Surprising statement creates mystery.

1 st Lt. Louis E. Allen Army NG - In a long line of heroes stretching from the greens of lexington and concord to the

Heroes, villains, and Monsters - . chapter 1: the hero’s journey. thousands of heroes. one journey. a simplified

‘Heroes’ Robert Cormier - . quiz. quick questions. what is francis talking about when he describes his ‘caves’?.

An Introduction to the Nature of Visual Rhetoric - Presentation adapted from the informed argument; brief sixth edition

Dr. Robert Ballard - When robert ballard was young, his favorite book was 20,000 leagues under the sea. he admired the