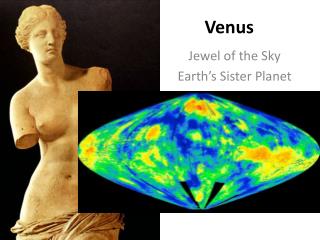 Venus. Jewel of the Sky Earth’s Sister Planet. General Information. Brightest object in sky after the Sun & Moon Named after the Roman goddess of love and beauty Once thought to be two different celestial bodies Thus known as the Morning or Evening Star Chapter 28 Review - . our solar system. what force draws the matter in an interstellar cloud together to form a star?.

CO 2 and Long-Term Climate - . greenhouse worlds: venus and earth. why is venus so much warmer than earth?. mean

3 - 4 Venus - . eros punished by venus. transit of venus. the planet venus appears to cross in front of the sun as seen

Lesson 5 - . venus. venus from earth. at its brightest, venus is about 60 times brighter than the brightest stars. venus