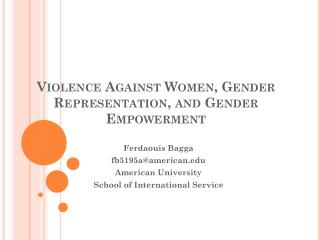 How Easy The Gender Prediction Is - Intelligender’s gender prediction test is an affordable, simple-to-use urine test

The GENDER-CONSIOUS Self - . or the gender-conflict self (the early feminist outcry). charlotte perkins gilman. “the

Gender and Development – Practical approaches - . - a presentation by mona dahms department of development and planning