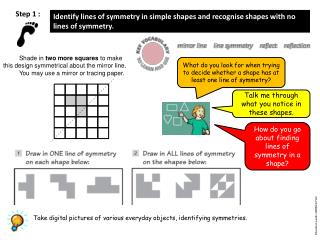 Step 1 :. Identify lines of symmetry in simple shapes and recognise shapes with no lines of symmetry. Shade in two more squares to make this design symmetrical about the mirror line. You may use a mirror or tracing paper. Lines of Symmetry! - . using quilts marj oesch pekin public schools. how often do you notice patterns around your home?.

Lines of Symmetry Quiz - . time to test if you understand lines of symmetry!!. in this quiz you will have questions and

How many lines of symmetry? - . fertilized egg. zygote is one diploid cell made by the fusion of the sperm and egg. in

Shapes, Shapes, Shapes - . by: ms. kelly. purpose. what is the title of the book ? is this book fact or fiction? how many

Creating Art With Simple Shapes - . by carefully implementing simple shapes to an html canvas we can create useful

3.1 – Identify Pairs of Lines and Angles - . parallel lines : two lines are parallel if they do not intersect and are

3.1 Identify Pairs of Lines and Angles - . objectives: to differentiate between parallel, perpendicular, and skew

Shapes, Shapes Everywhere - . teddy and his friends love shapes. teddy wants you to help him find the shapes in each

Symmetry of Functions - . even, odd, or neither?. even functions. all exponents are even. may contain a constant.

4.5/5.2 Parallel Lines - . i can prove lines parallel i can recognize planes and transversals i can identify the pairs