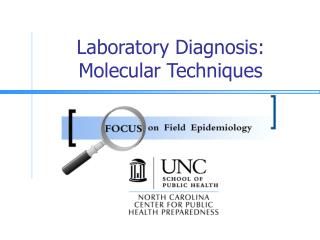 Molecular Biodiversity Laboratory - 2. . biology has become an information science. one of the main engine of the biology

Molecular Diagnosis of Gonorrhoea - . “the pros and cons from a clinical perspective” michael addidle. molecular

Molecular Biology Techniques - . part 1. learning objectives. this lecture reviews some of the techniques used in