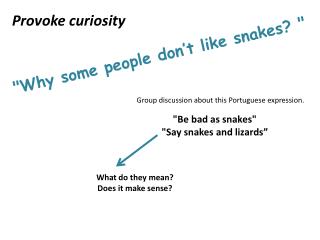 Provoke curiosity. "Why some people don’t like snakes? ". Group discussion about this Portuguese expression. "Be bad as snakes" "Say snakes and lizards”. What do they mean? Does it make sense?. NEGATIVE Don’t provoke children to anger How can we provoke our children? Overprotection - “fathers, do not provoke