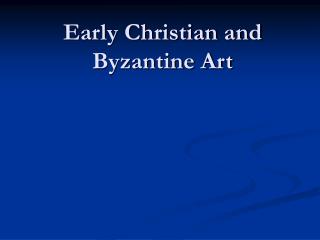 Jewish, Early Christian, and Byzantine Art - . three ancient religions that arose in the near east continue to inspire

Early Christian Art - . christian art is symbolic realism was not their goal but to communicate religious ideas at first,

Early Christian, Byzantine &amp; Gothic - . the roman empire at a turning point. christians have been outlaws from