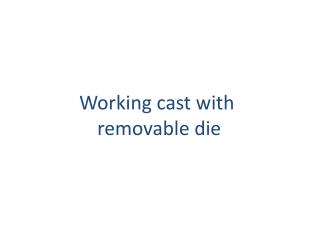 Working cast with removable die. The working (master) cast is the replica of the prepared teeth, ridge areas, and other parts of the dental arch.

Working Together…Winning Together - . what percentage of the funds received by alabama k-12 public schools in school

WORKING at HEIGHTS - . if only i was wearing a safety harness !!. introduction ladder safety safe roofwork scaffolding

60 Gadgets in 60 Minutes - Or how many gadgets can i take before my mind blows up? barbara fullerton, manager of

Cast Iron Bathtubs on feet and Pedestal Basins - Specialist restoration service that brings them back to new. if you own

Towards better Working Environment - . which one is your reality?. oh! its monday again. arre , its just 3 yet? nothing