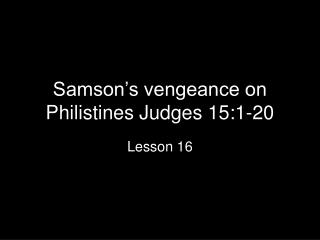 Samson’s vengeance on Philistines Judges 15:1-20. Lesson 16. Samson’s Vengeance. It was harvest time when wheat was being gathered (possibly in May or early June) Samson decides to go visit his wife A young goat was a gift to present to her Upon arrival he wanted to go into her room The Prophets (Nevi’im) I - . the deuteronomistic history (dh) (chapter 6 in textbook). the prophets : - the former

Chapter 9 Sentencing, Appeals, and the Death Penalty - . crime in the united states. if a criminal defendant pleads

UPPER MIDDLE CLASS - . merchants made up large number of individuals within the upper middle class most successful