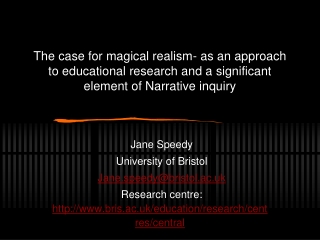 The case for magical realism- as an approach to educational research and a significant element of Narrative inquiry. Jane Speedy University of Bristol Jane.speedy@bristol.ac.uk Research centre: http://www.bris.ac.uk/education/research/centres/central. Narrative inquiry -what is it for?.

ABOUT US - . who we are. student teams solve open-ended challenges and present their solutions at tournaments t eams