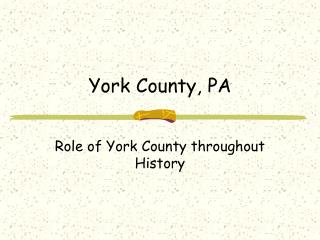 York County, PA. Role of York County throughout History. Inhabitants of York. The area of York was first inhabited by Indians. York was founded in 1741 when Thomas Cookson surveyed the land of the Codorus Creek. Applicants for the land then began to settle. In The Beginning….