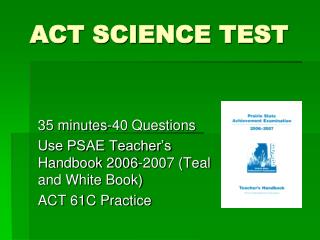 Nature of Science Test Review - . what is on the test: a) complete a full edd b) identify iv, dv, constants, control

The ACT Science Test - . goal of the act: to figure out if students know how to think scientifically. how: multiple

Introduction to Science - . chapter 1. the nature of science. scientists try to answer questions about the natural world

FCAT 2.0 Science - . what you need to know. what type of questions to expect. what is on the test?. test taking rules:.

The Science of Biology Ch. 1 - . what is science?. science  studying the natural world around us; must be open to

objective - . swbat identify lab equipment used in science in order to describe the use of each as well as following

Science. - Science. by abigail stivala. what is science?. science is a practical way of understanding the world and